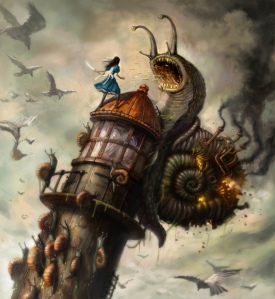 Ready to go back through the looking-glass?

It has confirmed that there will be a sequel to the dark tale of Alice, titled “Return of Alice.” Although there have not been any details released yet, there is already much confusion in the air.

In fact, there is a sequel and as stated on American McGee’s Blog, he stated the following:

“Yesterday, a few sites picked up a video of Alice made by one of our fans and confused it as an official trailer of Alice 2. I wanted to clear up any confusion – as I mentioned in my post it was unofficial, and does not represent any of the final art direction or story elements in Alice 2. We look forward to sharing information on the game in the future.”

You can view the video and click the link below for more information.